You are here:
Mohács & surroundings 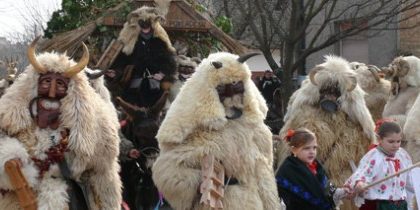 The Busó Carnival was included on the representative list of the UNESCO Cultural Heritages in 2009. This Carnival belongs to the family of celebrations bidding farewell to winter, welcoming spring and encouraging fertility, which also can be found in the beliefs of several other nations. It shows similarities to customs of the other peoples and the big festivities of the world. The Busó Carnival starts on Thursday with the Kisfarsang (Little Carnival), its main day Sunday and the closing programme takes place on Shrove Tuesday.
In Mohács the origin of the tradition is also explained with the legend of expelling the Turks. According to the legend the native Croatians, who escaped to the moorland of the Mohács island, grew tired of the Turkish dominations; so they dressed in frightening masks and armed with self-made rattles and noisy instrument they crossed the Danube in boats under the cover of the night to drive the Turks away from Mohács.

The Busó’s clothing is a short sheepskin coat turned inside out, wide trousers filled with straw. Over this they pulled colorfully gnarled women’s stocking knitted from wool and sandals made of leather. The wooly cloaks are fastened up by belts or tethers and a cowbell hangs on it. In their hands they hold the essential rattle or a wooden mace with many spikes. The most important thing which makes one a real busó is the mask with sheepskin hood, mostly carved from the willow and traditionally painted with animal blood.

The women, whose faces are covered with veils, the men dressed in wedding clothes and the people dressed in costumes are also part of the masqueraders in Mohács.
Today’s Busó procession starts at the Kóló Square, the centre of the old folk custom. The dressed-up busós and masqueraders gather here, this is the meeting point of the groups equipped with cannons, the Devil’s wheel, carts, horns, tubs, boats, and other spectacular objects and vehicles. The carnival is celebrated with enormous noise on the bank of the river Danube and in the surroundig streets. At nightfall the masked crowd returns to the main square to dance around the giant bonfire and fool about with people. The program of Shrove Sunday ends with a dance until daybreak, but the people of Mohács also celebrate the carnival on Monday and Tuesday. On Monday they visit houses, greeting the residents.

On Tuesday they gather up at Kóló Square anew, they march along the main street, and by placing a coffin on another bonfire on the main square. This coffin represents winter, and by burning it and dancing and joking around it, people say goodbye to the cold season and welcome the arrival of spring. The time of rejoicing continues all night long, ending the festivities of the Carnival season.