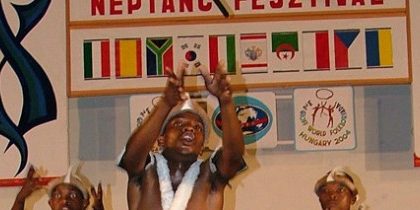 The third major event of Mohács Festival Month, the International Folk Dance Festival is traditionally held on the feast of St. Stephen and on the three days preceding it. The participants of the festival present their longer individual performances on the stage of the open air cinema at the local community centre from 11 p.m. On the fourth day, the folk dance groups take part in a spectacular street parade in the main street early in the evening. Later at 8 p.m. starts the gala where all participants appear on the stage with a short performance. They also get some presents from the organizers. The Festival is very spectacular, it is not a competition, though. Usually 5-6 foreign and 3-4 domestic folk dance groups are invited by the organizers, Béla Bartók Cultural Centre. The foreign participants also perform at some other venues while going on trips around Baranya county and in Pécs.